You can now log in to textadventures.co.uk using your Facebook account, and there’s also (finally) a “Remember me” option if you’re logging in to the site directly.

Until recently, you only needed a login for submitting games or comments, but now that you can save your progress while playing online, and even create games, it made sense to make logging in as easy as possible.

Nobody likes having to come up with and remember passwords, or go through the hassle of setting up accounts and waiting for activation emails. The new Facebook login eliminates all of that – it will create an account on the website for you and log you in with one click.

It doesn’t ask for any permissions – just basic information, which is essentially just your name and Facebook ID.

Any questions or problems please let me know!

I’ll be presenting an online TeachShare on 27th March, giving an overview of Quest and discussing its uses within the classroom.

It’s free to join in, and the session will be recorded so you should be able to watch it later if you can’t make it.

Hope to see you there!

Quest lets you add verbs to objects, so you can provide the player with varied and interesting ways of interacting with things in your game. You might add a “read” verb to a book to allow the player to type “read book”, or add an “eat” verb to a burger. By adding these verbs to the “display verbs” list for an object, they appear on the hyperlink menu:

But what if you wanted to do something a little more complicated? Light the kindling with the match for example, or inspect the flock of hair under the microscope? In Quest 5.1 and earlier, you would have to set up a command – “light #object1# with #object2#” – and then add some script to see if object1 and object2 made sense. And then, you would be making your game harder to play, because the player is forced to type that command – there’s no way of clicking or touching to trigger a command requiring two objects.

Quest 5.2 makes this easier by introducing two-part verbs. These fit in with the existing verbs mechanism, making them very easy to set up. Best of all, they’re mouse and touchscreen friendly.

Setting up a two-part verb

The process for setting up a two-part verb is very similar to setting up a normal one-part verb. Just go to an object’s Verbs tab and add the verb you want. In the screenshot below, we’ve added a “light” verb to the “kindling” object:

(Note – these screenshots are from the web-based Editor, but the steps are the same on the desktop version)

The next step is to set the verb option to “Require another object” – a new setting in Quest 5.2.

This will then give us an editor where we can add objects which can be used to the light the kindling. 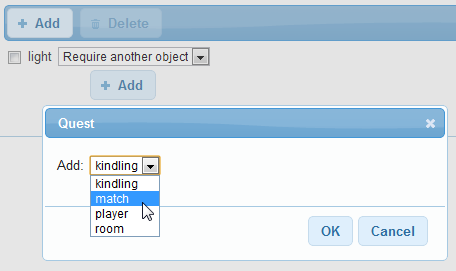 We can now set the script that runs when we light the kindling with the match:

Finally, let’s add “light” as a display verb for the kindling object, to make this verb usable with mouse or touchscreen. 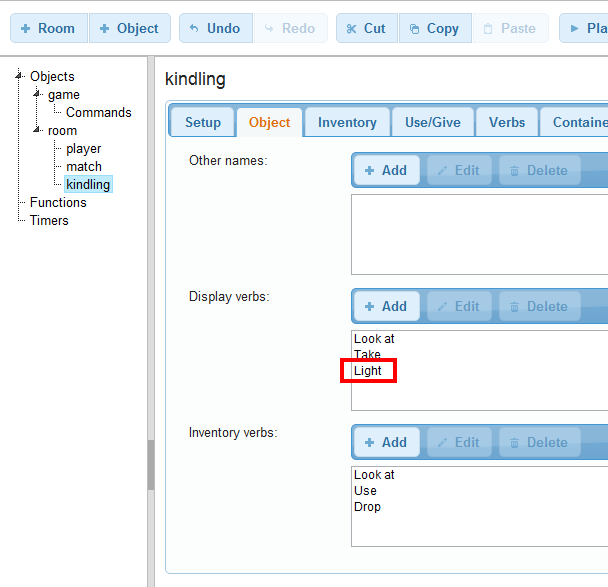 When we play the game, we can type in “light kindling with match”, and we get the expected result – in this case, we see the message “The kindling vanishes quickly in a brief burst of flame”, and then the kindling disappears.

But we can also activate this command using the mouse or touch instead. We added “Light” as a display verb, so we can select that:

Selecting this brings up a menu of things we can use to light the kindling with: 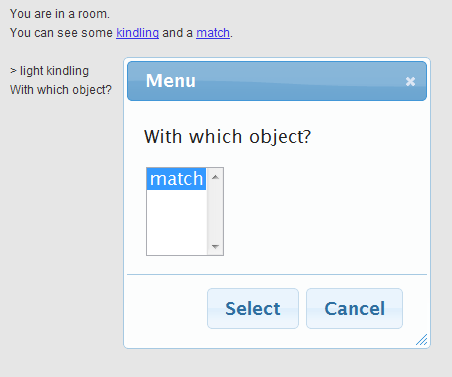 This menu shows all visible objects, excluding the object we just tapped on – in this case, we only have one other object in the room, the match. We can tap Select to trigger the command:

By setting this up as a verb, we get a lot of functionality for free. Previously, in Quest 5.1 and earlier, if we’d set up a custom command for this, we would have had to manually deal with the case where the player tried to light the wrong object. Here though, Quest sensibly handles the full range of things a player might type in – “light flower pot”, “light kindling with egg”, “light myself with match”, etc. 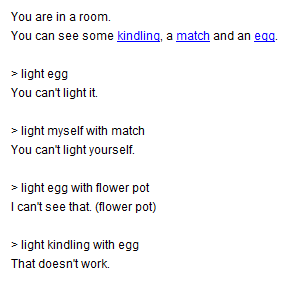 The existing “use” and “give” commands have been updated in Quest 5.2 to display a menu like the “With which object?” menu shown above if the player tries to use them on their own. This means these commands can now also be used without typing.

Try it out now

This functionality is part of Quest 5.2, which will be in beta soon. In the meantime, I have already deployed this new feature to the web-based editor preview, so you can try it out online.

Please let me know your feedback in the comments!

If you use Google Chrome, you can now add the new web-based version of Quest into it as an app, via this link. 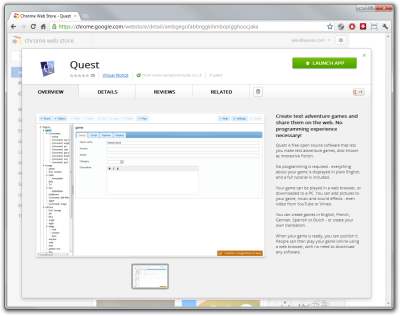 Once you’ve done that, Quest will appear on your Apps tab:

That’s all there is to it – it’s pretty much just a link for now. In the future, it could be enhanced to log you in automatically with your Google account, giving you quick and easy access to your games simply by logging in to Chrome.

The web-based version of the Quest editor is now available publicly for the first time. Many thanks to all those who tested it during the closed beta – your feedback has been really useful. Please keep it coming!

I’ve redesigned the Quest page, to reflect the fact that for the first time Quest is now available on more than one platform. Whereas before it was a Windows-only download, now you can access Quest from anywhere, in any browser.

I don’t expect the desktop software to be disappearing any time soon, but with the increasing popularity of always-connected devices such as tablets, it’s clear that any popular software will really need to be available as a web app.

Quest was the first system to allow people to play text adventure games online (as far as I can tell – Quest has had this since February 2007, and I can’t find any references to Parchment before 2008), and now it’s the first full text adventure editor to appear on the web (i.e. it’s much more than a big text box!). Currently, about 10 times as many people play games through the web than download them to play offline, and I’m hoping that the new web-based editor will similarly increase the reach of Quest. It’s not just about extending the editor to Mac, Linux, iPad, etc. – many people simply can’t (or won’t) install software even on Windows PCs.

But it’s also more than just making the software easier to access on any device – it opens up new possibilities too. For the first time, you can start editing a Quest game at home on your PC, continue it on your iPad in the bedroom, and pick it up again during your lunch hour at work. If you’ve got good mobile coverage, and even better eyesight, you can continue on the bus home!

It also means collaborative game editing will become possible, and this is something I plan to look into soon. I’m keen to hear any more suggestions, so please add your comments below or drop me an email.

You can find out more about the web version in the original announcement, but why not sign in and start using it now?

This is still a beta version, so a few features are not implemented yet. Most importantly, at the moment you can edit and play games while logged in, but there’s no way to publish them on the site yet. This is partially because I’ve simply not implemented that feature yet, but also because the web version is Quest 5.2, and the desktop version of this is not in beta yet (so that would mean any games you published would not be playable on the desktop). Both Quest 5.2 Beta for desktop, and the ability to publish games, are coming soon – probably within the next few weeks.

Also, some of the more advanced features of the Quest desktop editor are not yet implemented on the web version. These will probably be added later, after the first “non-beta” release (probably as part of Quest 5.3 later this year). These are:

I look forward to hearing your feedback! You can email me or send feedback via Uservoice.